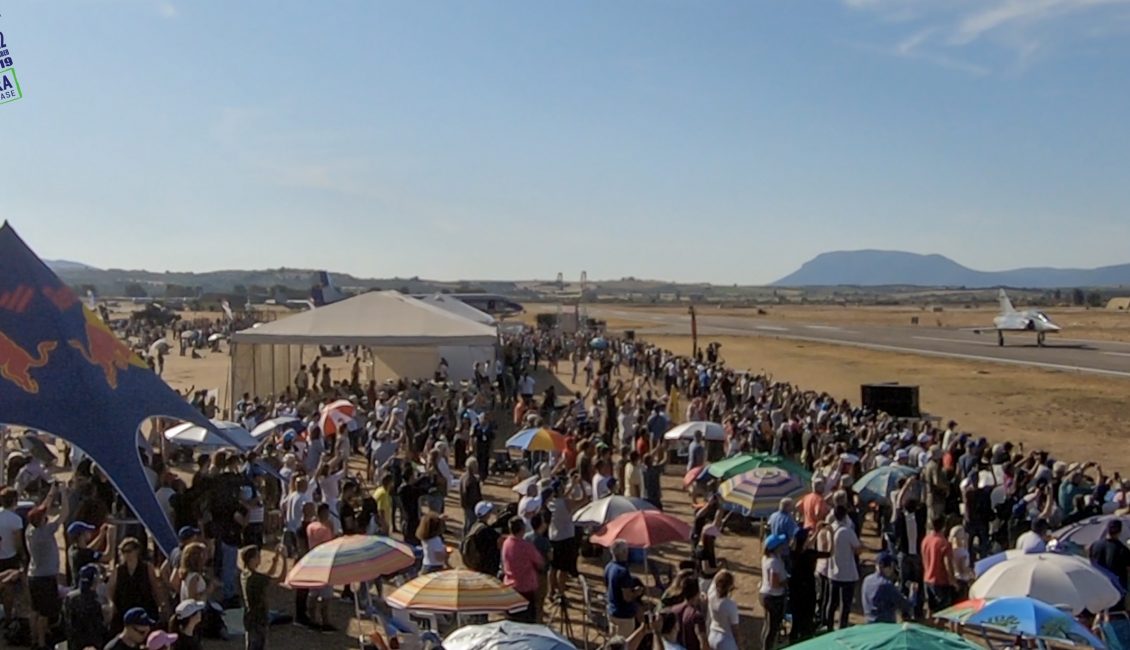 Over 5,000 foreign visitors, spotters and journalists travelled from 20 countries around the world, including far-off Japan, to attend one of Europe’s most important airshows.

Pilots with special flying skills, rare aircraft from the Second World War that took to Greece’s skies for the first time, ultramodern fighter jets, solo display teams and aerobatic squads put on a unique show for the thousands of spectators who this year, once again, flocked to Tanagra airbase to watch the 8th ATHENS FLYING WEEK.

The participation – for the first time – of the world-famous PATROUILLE DE FRANCE in ATHENS FLYING WEEK is indicative of the biggest Greek airshow’s steady rise. The “French Patrol” celebrated the 66th anniversary of its founding, presenting a super-spectacle of manoeuvres and precision formations to an enthusiastic crowd that watched with bated breath. Their flight over the Sacred Rock of the Acropolis was the best advertisement for our country abroad, enhancing the international promotion of Greek tourism.

The extensive flight programme included the Royal Jordanian Falcons, with their aircraft manoeuvring to eastern rhythms; the Belgian F-16 Solo Display Dark Falcon, a favourite with Greek fans; the Austrian Air Force’s Solo Display Saab 105; Frenchman MIKA BRAGEOT from the RED BULL AIR RACE; and the legendary Flying Bulls, who brought three unique aircraft to Greece for the first time: the historic Douglas DC-6, the CHANCE VOUGHT F4U-4 “CORSAIR” – a symbol of WWII – and the B0105 helicopter. In fact, the legendary F4U-4 “Corsair” from WWII flew with the wonderful DC-6 over the enthusiastic crowd, providing a unique thrill.

The fighter planes and helicopters of the Hellenic armed forces stole the show once again.

The Zeus F-16 DEMO TEAM and T-6A DAEDALUS filled hearts with national pride and were enthusiastically applauded by the audience.

A truly special moment came when Squadron Leader Georgios Papadakis made his last flight at an international airshow, in the Solo Display Team’s F-16 Zeus.

The spectators were wowed by the magic of Dimitris Ververelis with WIZARD AEROBATICS and the AIRBUS EC-120B helicopter, the RC KAVALA ACRO TEAM, and Giorgos Papagiannis, the official pilot of Powerbox Systems (Germany) and Desert Aircraft (USA), with aeromodelling demos.

OLYMPIC AIR and AEGEAN were there in force with their DASH 8Q400 and AIRBUS A320 aircraft, respectively.

With its participation in the 8th ATHENS FLYING WEEK, AEGEAN celebrated its 20th birthday with a giant cake prepare by the AFW team, and it blew out the candles with an impressive low pass from the AIRBUS A320.

This year’s ATHENS FLYING WEEK was kicked off by SKYDIVE ATTICA, with skydivers unfolding a giant Greek flag in the air.

Another crowd favourite was the dynamic night show that thrilled spectators with fireworks and music combined with aerobatics in the skies, by world champions JOHAN GUSTAFSON from Sweden, FRANK VAN HOUTEN from Holland and LUCA BERTOSSIO from Italy, who closed the programme each day with an explosion of colour and excitement.

Once again, the static displays of historical and modern aircraft were flooded by avid fans who seized the opportunity to visit rare exhibits.

As it does every year, ATHENS FLYING WEEK promoted a Greek tourism destination, this year choosing the border island of Kastelorizo. You can watch the video that was shown during the 8th ATHENS FLYING WEEK at this link: https://www.youtube.com/watch?v=xaJtOmHrNHY

The President of the Republic, Prokopis Pavlopoulos, honoured the 8th ATHENS FLYING WEEK with his presence.

Every aspect of the event went very smoothly, from the flow of arriving and departing spectators to the operation of the parking lots, and especially the spectacle provided by the airshow teams, bringing dozens of glowing comments from our visitors.

The thousands of visitors enjoyed a unique experience over two adrenaline-filled sunny days of singular spectacles.

They ate at the two fully equipped restaurants with dining areas, cooled off in our spacious bar and strolled through the commercial fair.

ATHENS FLYING WEEK establishes Greece as a thematic tourism destination, providing the largest airshow event in Greece and forging ahead into a dynamic new era.

Our young visitors enjoyed a playpark and two full 1940-1945 army camps – from the Greek-Italian War (1940-1941) and Greek Armed Forces in the Middle East (1942-1945) Re-enactment Teams – that transported them through history via interactive participation.

The events of the 8th ATHENS FLYING WEEK culminated in the annual Closing Party, at which all of the participating teams received awards.

Following the huge response to this year’s event, we have the pleasure of announcing the dates for the 9th ATHENS FLYING WEEK: 19 and 20 September 2020.

The Region of Central Greece is our co-host and constant supporter.

We thank them and our hospitality sponsors, NJV Athens Plaza and Athenaeum Intercontinental, for their confidence and support.

We are especially proud of the support we have always enjoyed from the major Greek tourism organizations: The Greek National Tourism Organization (GNTO), the Greek Tourism Confederation (SETE), HATTA, and HAPCO, who recognize AFW’s unique contribution to thematic tourism and stand by the country’s major aviation event.

We thank all the fans of ATHENS FLYING WEEK, who flooded Facebook and Instagram with thousands of ‘likes’ and continue to share photos and videos on all of the social networks.

The ATHENS FLYING WEEK team expresses its grief at the untimely loss of Ioannis Damianoglou and its sincere condolences to his family.

Starting this year, you can download the ATHENS FLYING WEEK application from Appstore (iPhone) or PlayStore (Android).

Be the first to get news about airshows, contests and surprises – and receive a constant flow of photos and videos.